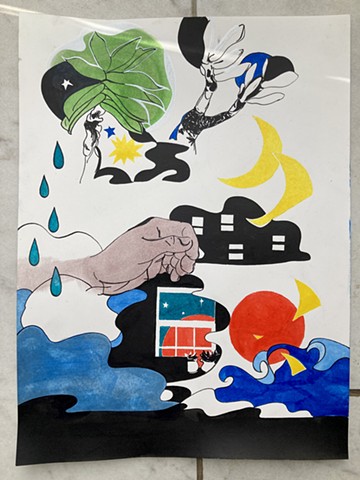 While I hope not to be someone who inappropriately shares James Baldwin quotes, today I’m reading “No Name in the Street” This bit has been on my mind:

“I’ve always been struck, in America, by the emotional poverty so bottomless, & a terror of human life, of human touch so deep that virtually no American appears able to achieve any viable, organic connection between his public stance & his private life.”

The reconciling of public and private life fills me with anxiety in many ways. Since becoming a parent, my stakes have changed. Being a parent is a largely unsupported role that is held at the same expectations of accomplishment as to a single person.

My son’s father is, to say the very least, alt right. I consider myself a confusedly diasporic Puerto Rican, and while that doesn't describe my political values necessarily, I think my character can imply that I'm not alt right. He and I are not together at all and we battle as co-parents. Our son adapts and evolves in these polarizing ways of understanding. He has two lives. I try to be mindful of what my son is experiencing. Falsely, he becomes a symbol of reconciliation. He is often the carrier of conflict. When I myself interact with my son’s father, I experience his public self. Through my son, I experience his father’s private self. I feel that private self has unbelievable dimensions of sorrow, more dimensional than any of his moralities. Engaging with him and his father, I try to be at my best wits at all times.

The reflections behind this drawing. I remember I had a coworker years ago, when we would have shifts together they would say we were "bringing the Caribbean and West African heat," since they were from Sierra Leone. That always made me smile. "Oceans" is a missing of home and friendship.